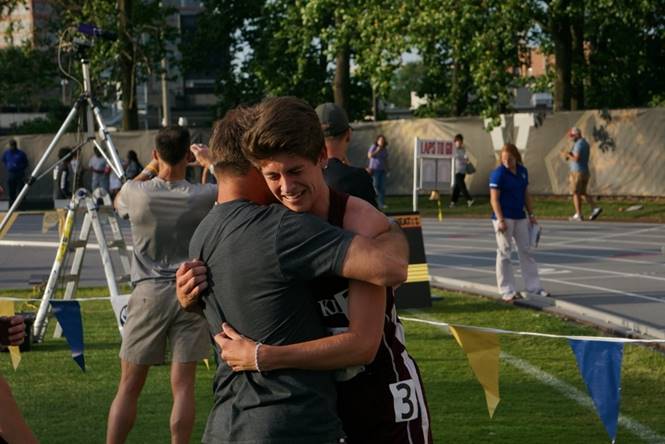 If I Can Do That, What Else Is Possible?

In our continued effort to highlight the voice of our clients, we’re bringing you some thoughts on challenge from Paul Zani. Paul’s experience pushing himself physically translates into his professional role at BD, and as he tells below, parenting as well.

I have four kids. When they were 10, 12, 13, and 15, I challenged them to run (or walk) one mile per day for 100 days. I told them I would give them $100 if they finished. It was a bribe, but also an investment that would go into their savings account. It was a spontaneous idea, but they all jumped in. Each one of them took me up on it and each one made it to 100 days.

They had no off days for weather, sickness, etc. They ran while at camps, while spending nights with other kids. They ran miles near midnight, on treadmills, in the rain, in the freezing cold, and while on vacations. You name it – they fit it in. That was a part of the challenge. To miss a day would void the streak and the challenge. As a result, they didn’t miss any days.

The runs became a part of who they were.

Like the daily habit of brushing your teeth, the mile just became a certainty in each day. It wasn’t that hard for them to recognize that they could continue. One nine minute per day commitment after the next.

After 365 days, they all completed the challenge. And each one had $730, the $365 they earned and my match, put in their savings account (where it still is today). I was fortunate in that we also ran a lot of those daily miles together – making memories and having quality time together.

You might be asking, “What kept them dedicated?” I think when you commit to something, and you start a daily streak, there naturally becomes this tipping point where it’s more painful to stop than it is to keep going. Internally, we all have this sense of pride and satisfaction. When we play into that – we thrive. When we choose to throw in the towel, on the other hand, we’re left with a sense that we didn’t do our best.

With any “streak”, after a certain amount of days, the thought of stopping, of giving in, is perceived to be worse than what you’re already sacrificing. The more you have at stake or the more people you’ve told, the more powerful the motivation is to keep going.

As the challenge was coming to an end, I again asked, “Who wants to continue?” Three out of four were out, but they all went on to be great runners. My youngest son credits this challenge with cultivating the love he has today for running. My daughter said, the challenge helped her recognize she could do tough stuff and to not be scared off by big challenges. And my oldest son, noted that he struggles with committing, but can look back now at that huge commitment and remind himself, it’s okay to take a big commitment leap! Today he’s an entrepreneur and small business owner who’s leveraging that “all in” commitment every day.

And, one of them decided to continue on – without pay. He logged mile after mile. Together we easily put in 500 miles as I joined him for many of those runs. Coincidently, his 1,000th day fell on New Year’s Day and he decided that made for the perfect stopping point. He ran that last mile on his own, and very quietly celebrated a huge accomplishment.

He took a simple challenge as a 12-year-old, turned it into a daily habit, and set a new standard of expectation for himself.

Over time, he realized he could think bigger and push himself harder and further than most others. Running every day for 1,000 days from age 12–15 sounds impressive after the fact, but it all started with my challenge and his commitment, one random day.

Now he runs in the Southeastern Conference, and has his sights set on a sub 15-minute 5k (crazy fast). The photo above is of him after he ran a 4:20 mile in the last race of his senior year – earning him the scholarship he was striving for: Division one at The University of Tennessee.

Forever, all of them will own the fact that they were able to do something unique over a long time period. Now they can reflect back and know with confidence that they have the ability to stick with it. They know they did something super hard that most others aren’t willing to do. The experience gives them the quiet confidence to take on the next challenge that’s put in front of them too.

We all have untapped potential and pushing out of our comfort zone is the only way to grow.

This month, I’ve committed to a challenge called “Calendar Club”. The challenge requires you to run the day of the month. So April 1st is one mile, April 10th is ten miles. In total, I’ll run 465 miles this month. I’ve been a runner for most of my life, but I’ve never challenged myself like this before!

But, here’s the thing, when we test ourselves by pushing our limits, we can see new horizons – new potential. Today, is April 15th so I’m halfway through the challenge but in terms of the miles remaining, there’s a long way to go. I’m consumed with fear that I’ll fail. I’m laser focused in an effort to prevent failure at the same time. And when I get to that invisible finish line, I know one thing is certain, I’m going to say, “If I can do that, what else can I do!”

Who’s to say you couldn’t start something today – in your life or in your kids – that you can be proud of for the rest of your life too?

Paul Zani is a Senior Leader at Dickinson, one of the top 5 largest Medical Device companies in the world. Over 27 years, he’s advanced through several different leadership roles at BD. In his current role, he’s responsible for a team of 150 people made up of sales and clinical representatives covering the U.S.

He’s a family man with four kids and a wife of 26 years. In his free time he likes to test his limits through endurance events. He’s spent time with Navy Seals completing a 50hr mini version of the SEALs famous “Hell Week”. He’s run several 100 mile foot races always finishing inside the top 10% and has won his age group. He’s taken 49 people from his organization to the Grand Canyon and helped them go from rim-to-rim; a 26 mile journey ending with a 5 mile, 6,000 foot climb out.

Subscribe to our newsletter for exclusive coaching tips, Cadence Leadership news, and all our latest blog posts.