At Cadence Leadership + Communication, we’re committed to helping people create real and impactful change in the workplace and beyond. We firmly believe that to inspire change, we need to share ideas and highlight the leaps others take to move the needle. When Synthia Kloot, Senior Vice President of Operations at Colliers International, shared her journey with Diversity, Equity & Inclusion, we jumped at the chance to share it on our blog. We hope her experience inspires you to use your voice and shift from an observer to the driver of change.

As I entered the Canadian Museum for Human Rights this past September I was stuck by both feelings of familiarity and newness. You see, I’d been here, although briefly, before in the summer of 2018. On that August evening I found myself with some free time after a day of meetings in Winnipeg and my colleagues and I took a whirlwind tour of the Mandela 100 exhibition. Having lived in South Africa till adulthood and through the transition from apartheid I was keen to see how the journey was being represented. As a privileged white South African I still feel sadness and shame for what was.

Taking responsibility to do more to create change

I tried to take in as much as I could in 30 minutes, and I reflected on what it meant to bear witness to injustice to understand the attitudes, beliefs and conditions that allow power to dominate and destroy. Bearing witness was a practice I had adopted in earlier years, and I had visited Robben Island twice and found both occasions incredibly moving. Standing in the cell where Mandela spent so many years had been eerie and inspiring. His perseverance and dedication to creating change were absolutely inspiring. However, that night as I wandered through this powerful exhibit, I considered my responsibility to do more than just observe change, and instead be a part of driving it. 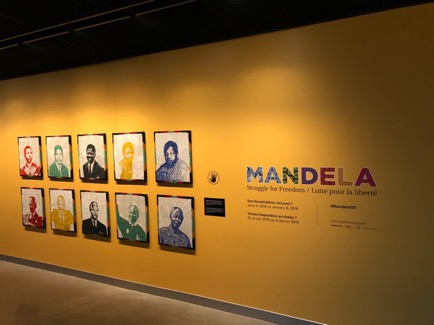 Shifting from bystander to upstander

In the time since that August night I’ve been on a journey spurred by an event that left some people powerless, harassed, bullied. When the situation came to light, I discovered that the attitudes, beliefs and conditions that enabled the harmful behaviours were surrounded, as they often are, by silence. The more I learned about the event I realized that I could have helped had I known. This caused me to feel powerless, ashamed and frustrated. After self-reflection and many hours of thinking, ‘How can I make it better?’ I decided to act. I channeled my energy into establishing a workshop that would open conversation and create awareness of bullying and harassment in the workplace, empowering people to move from being bystanders to upstanders.

This workshop was a grassroots effort, developed by people who want to drive change. Summer this year our team has presented in Vancouver, Calgary, Toronto and Winnipeg. In each workshop we learned as much as we have shared. Each conversation has been empowering and met with gratitude. Bearing witness has been      an important part of being better and doing better in the future. I have been inspired to move to action. Fast forward to 2019, and the last 13 months have come full circle: The workshop in Winnipeg was delivered at the Canadian Museum for Human Rights followed by a more leisurely tour of the museum.

A few simple words can change everything

Our actions do not need to be huge gestures; each of us has the power to speak out when we see something that is not right. Pay attention to your surroundings and lead, be an upstander in the moment.

When you see bullying or harassment you too can say `That’s not cool!’ or ‘We don’t do that here’.

A few simple words can change everything! When you see inequity be an ally by creating an avenue for the victim to be heard.